MY SITE
welcome back

​Welcome Back tells the current story of poets previously published by Tiger's Eye Press.
​Nothing is more satisfying than hearing about the further accomplishments of our poets. 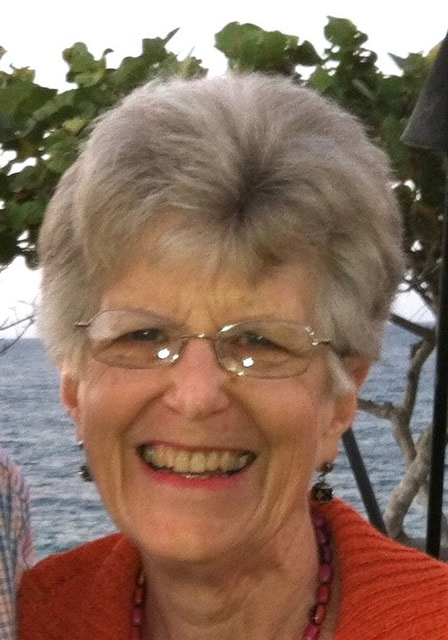 Read each poem.  Once silently, once aloud and a third time silently.  If you don’t get it, forget it.  Thus John Snyder, retired literature professor from CCNY, tells our class at the Osher Lifelong Learning Institute at the University of Delaware. John’s class, Good Poems for Hard Times, looks at selected poems from Garrison Keillor’s anthology.

My husband Neil and I have carried poetry phobia backpacks since middle school, and take this class to lay them down. Older learners, we dutifully read five poems assigned each week and vie with others to add our two cents during class discussions.  So many hands!

One poem, Wedding Poem For Schele and Phil, by Bill Holm, changes my life. At our kitchen table, Neil and I read aloud: A marriage is a risky business and resonate with Bill’s dark secrets of the long married:


The hand set quietly on the other’s flank
that carries news from another world
lightyears away from the one inside
that you always thought you inhabited alone.
The heat in that hand could melt a stone.

We both burst into tears.

And isn’t this what poetry does? Carries news from another world . . . you always thought you inhabited alone?

Not long after, I awake with my first poem.

On the Railway Bridge

find the kind of wind
you throw caution to,
a girl in a dream haze
posed on a forbidden span,
her mother’s warnings
faraway whistles.

Consider her track
as balance beam,
bridge
as life-sized Erector Set –
a frame
for her escape.

In her pocket find
a wafer-thin
Indian Head Nickle,
long ago leveled
by rolling wheel.
Such a thin veil

between dreams
and danger. Still
she returns, evades
oncoming trains,
dances around
the third rail.

after all these years
you know me
by heart

By nose we travelers drift
to the kitchen. Tran Mai, roughly
our age, lures us into orbit
around the pho pot, centripetal –
onions, beef bones browned, baked,
bursting with marrow, stock laden
with fresh ginger, Thai basil, hoisin sauce --
a shock of steam, rice noodles
like a rhumba of rattlers poised to slither
into our bowls.  We eat, our sighs
a shared language of slurp.
Tran smiles.

Speak to them, her sons coax.
Tell them. We will translate.

Her words, soft with Asian lilt,
set out a new stew, vintage 1969.
We, former enemies, fall into
her story, quake
as thunderous B-52s raid
her northern village.
Fragments flash like old news reels –
shards of trees, a deluge
of bombs every fifteen minutes.
Napalmed bones snap, marrow flows.
Snaking through mine fields, we
imagine our own pilots, foe
above the clouds. In her grasp,
we Americans face our own
reckoning— blood shed
on enemy soil. Her soil.

Trans’ words expose my shame,
leftovers from the sixties,
years when I took to the streets,
shunned Stars and Stripes.
But now, this soup and this story
shimmer like marrow bones
primed for the pot, a recipe
for forgiveness.

Diana Woodcock has continued to write poetry about the Arctic Circle and climate change since the release of Near the Arctic Circle (Infinities series) in 2018. Tread Softly was released in 2018 (FutureCycle Press). Most recently, her fourth full-length poetry collection, Facing Aridity, was published by Homebound Publications as a finalist for the 2020 Prism Prize for Climate Literature. Forthcoming is Holy Sparks (2020 Paraclete Press Poetry Award finalist) and Reverent Flora: The Arabian Desert’s Botanical Bounty. In June, she’ll be heading back to Alaska to continue her research for a poetry manuscript/work in progress that was begun during her first visit to Alaska in 2012, when she was awarded a writer’s residency in Misty Fiords (Voices of the Wilderness, Alaska U.S. Forest Service).

Outside Longyearbyen, eight hundred
miles from the North Pole, scientists,
counting and envisioning the cost
of past and future disasters – even
Syria’s civil war – Aleppo’s seed bank
destroyed by bombing 2015 –

have tucked into a mountainside,
ensured in permafrost, ample space
for four and a half billion critical
crop seeds worldwide.  If the worst
should happen, this backup collection
will safeguard vegetation.

Or is it all mere speculation –
no place feasible but the hereafter.
But how to disentangle ourselves
from earthly (Arctic) time and space?
Standing in front of the entrance
to the doomsday seed vault –

something about it putting a halt
to doubt – I began envisioning
what the seeds are all about.
Was it too late to practice faith?
Dalal from Kuwait had brought
seeds from her desert home,

assuming she could contribute
them right there and then.
Tottering on the threshold
of before and after, I prayed
for faith as small as that biblical
mustard seed.  Immerse myself,

I coaxed, in the hope of seeds,
that someday planted,
they can reverse the damage.
Feeling a thirst for roots,
recalling the burning bush –
how thorns and thistles are not

the earth’s original natural fruit –
I wished upon a seed deposited
just then in the scat of that snow
bunting warbling and hunting
insects beside the mountain stream
flowing past the global seed vault,

toward the sea, under the midnight sun.

Note: In 2015, the first withdrawal was made by researchers in Syria after their
seedbank in Aleppo was destroyed by bombing. Those seeds have since been sent
to Morocco and Lebanon, where they'll be ​planted and used to research how to
​grow crops in the arid region. 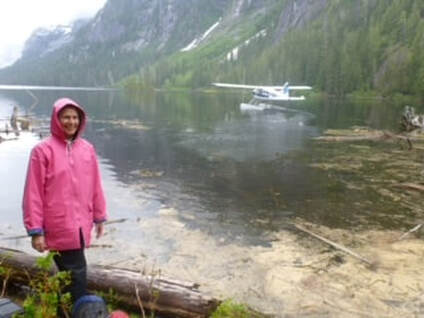 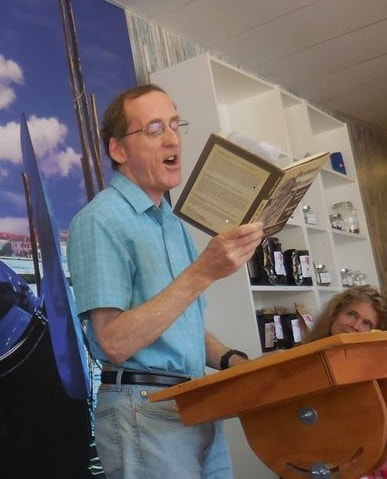 
​Tom Goff continues to be one of the finest poets who successfully gives life to historical figures, bringing them back through his poetry so we might better understand who they were.

Goff has another poetry collection, Reading in the Dark, currently under consideration. Sections within the manuscript include poems on the Earl of Oxford as Shakespeare, and on John Keats as perceived by Amy Lowell in her 2-volume biography of 1925.

Keats, under doctor’s orders to speak low
Or not to speak, is at the Hunts’. A party:
One Mrs. Gisborne starts a topic, so:
On music, of the castrato Farinelli,
Whose vocal splendor, his capacity
To hold high notes ad infinitum, swelled
Or diminished, he could lengthen by his hearty
Pair of bellows, breath control, but spelled
By cyclical breathing, intake and exhale
Made simultaneous by constant practice,
Braced with support deep as his tensile belly.

Keats’ being here is sheer tenacity.
This Mrs. Gisborne cannot help but fail
To gauge how sensitive the breath-holding act is
To Keats, indeed she’s not certain he is Keats.
Gamely—for the ill poet has brooded on such
Prolonged sostenutos—he declares these feats
A trial for both singer and hearer. Touch
The subject, and you poke his damaged lungs
—Like under-the-fingernail skin pricked with pins.

How equable, though, the bob of both their tongues
With fascination on the listener’s fear:
The way the too-long-sustained cadenza spins
Empathic unbidden dread of suffocation.
In murmurs, Keats must assent to what she says;
How can she know the publication near
For verses of his where a pearl diver descends,
Bare body exposed to the sharks, to the stingrays?

Hands filled or empty from oyster beds, his ration
Is risk for meager pay, risk of the bends
When full-to-bursting lungs must surface regardless
Though blood runs from his ears. The party chatter
Surrounds the conversing two whose hands are cardless;
​What earnest discussion of a most primal matter
Implicit in music as in poetry,
The instinct to gasp for air, the strain to be
Good and suspend the fermata; close to death,
Has Keats not always known how recitative
Is paid out silkworm? How like the spun shirtsleeve
Spun stanzas are threads, of unbearably thin breath? 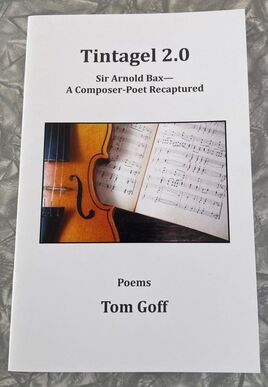 Caitlin Johnson has continued to write poetry since the release of Boomerang Girl in 2015. Mere months after the release of that chapbook, her first full-length collection (which included many of the poems that comprised Boomerang) was published by Pink.Girl.Ink Press.

In 2019, Johnson self-published a chapbook, WAR/La Guerre as a limited edition to satisfy the need to see the project through after several rejections from competitions.

Just released from Stubborn Mule Press is Delta, Johnson’s second full-length poetry collection. Like Boomerang Girl, Delta has an underlying theme; instead of mythology, this time it’s the periodic table of elements and other scientific concepts. She is, put simply, a series poet at heart.